Empathy is understood as the ability to feel or enter into the emotions of another. The science fiction writer Octavia Butler, in her dystopic novels Parable of the Sower and Parable of the Talent, created a main character suffering from an affliction called Hyper-Empathy Syndrome- the inability to observe someone in pain without feeling pain to debilitating effects. This character directly experiences the pain and pleasure of another and is frequently incapacitated by the violence unfolding around her. With her abilities or affliction of hyper-empathy, she gains insight into others through a process that threatens the limits of her self.

1. Excerpted from Department of Defense Document 003146, derived from the ACLU Torture FOIA documents, describing Iraqi and Afghan men killed in American military prisons and subjected to autopsies; from the project, Did You Kiss the Dead Body?

I sit in the audience at the conference, Reckoning with History, and start having what could be called a hysterical physical response. I’ve experienced this before in ethnographic museums. The last time this happened I was at the Weltmuseum in Vienna attending the opening of my exhibition, Staying With Trouble. My right eye begins reacting to the conference presentations with violent impatience. Twitching uncontrollably, I try to will it into submission. The result is failure. My body rebels even as I try to perform the role of the good audience member, erect and frozen posture, silent, notebook in hand. I am waiting to recognize the concepts being thrown around with one dispassionate gesture after another. Colonialsm, Ethnography and Musuems -mantras mumbled into the microphone. Where theft and the most barbaric orders of violence once dwelled, there are only empty linguistic markers left, devoid of any recognizable meaning. Are we talking about the same thing? I feel a scream building in my belly which I quickly suppress and transform into the familiar taste of acidity and bitterness.

As an artist, I delve into histories we’d rather not remember, histories of brutal violence that lay beneath our feet but are skillfully ignored. I immerse myself into these histories only to frequently experience nausea, grief and rage. I have physical symptoms as well. Shortness of breath, clenched stomach, tightening of my chest and lungs, dizziness, rapid heart rate - all the physiological responses to a fear-induced, fight or flight response. It is our survival that is at stake in these archives, in these museum collections and in the representation of our histories. To experience history as an embodied subject that can invade your deepest interior spaces, means to transcend representation and move into the realm of somatic experience.

Colonialism is now. It never died. It is stronger than ever. Facilitated by new technologies, the evidence of its destruction is growing. Europe’s borders won’t hold. The ethnographic museum’s only hope is to understand that it is a holocaust museum. Once this conceptual shift can be made, we can deal with the real work at hand -making something that can heal out of this vast landscape of trauma. 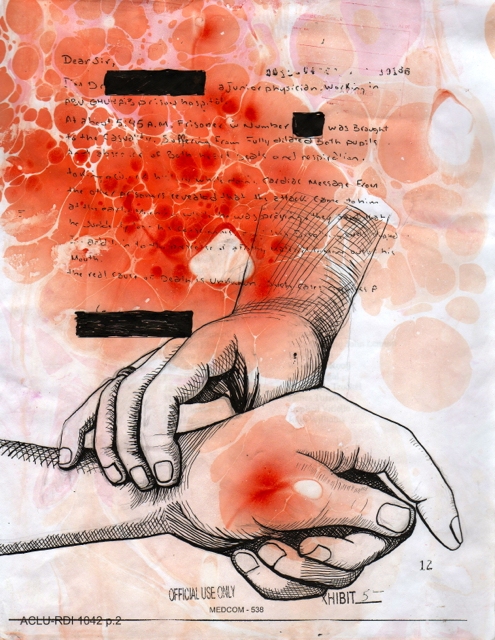 4. Rajkamal Kahlon. From Did You Kiss the Dead Body, 2012, marbled U.S. military autopsy report and ink

For me this has meant being in contact with the source of the trauma. I look at the visual records of colonialism carefully searching for those uncanny moments that can reveal something about the world I’ve inherited and now must inhabit. Contact and acceptance as opposed to denial is only the beginning of the process. Next I try to understand what the images are saying to me. They can speak if I listen closely. Their speech is one layer. They provoke deep emotional responses in me which also need decoding. Then the intangibles of time and reflection are added into the brew. Patience is required. And attention. It can be instantaneous, take a few days, weeks or many years to have a coherent understanding of what my course of action might be in relation to the traumatic material before me. 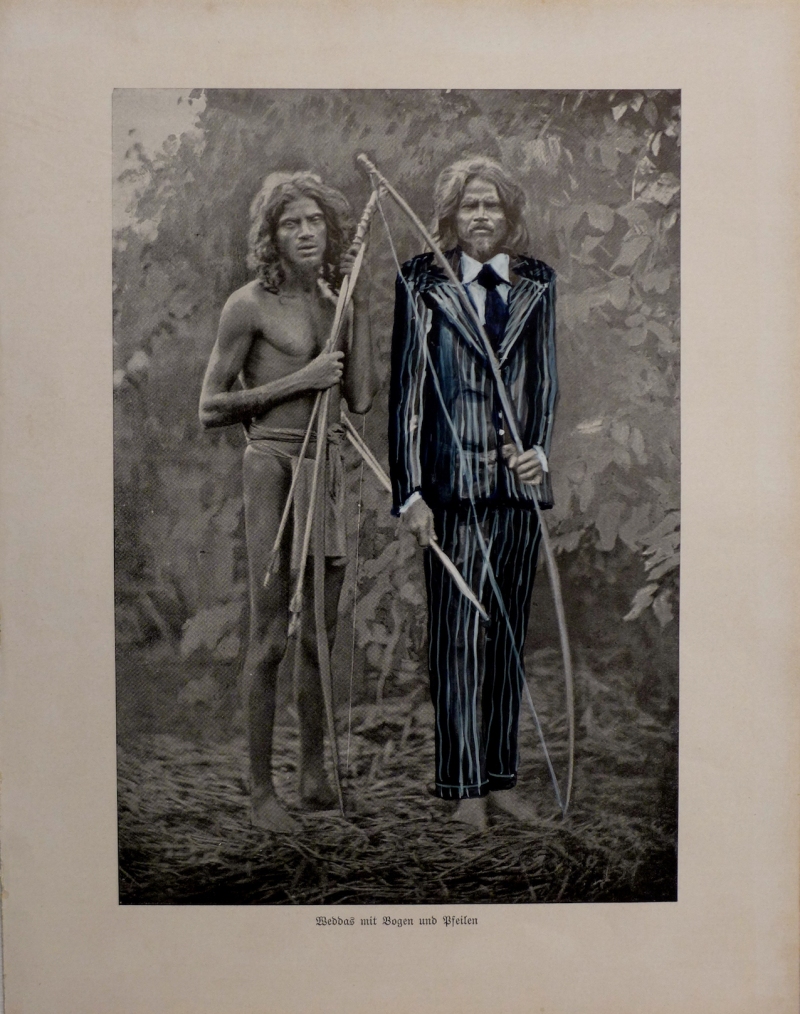 A recent project called Do You Know Our Names? is one such response to the central role of ethnographic photography within larger colonial projects. In one way you could say that my twenty years of study and contact with the visual legacies of colonialism all come to bear in this project. There is a visual arch operating in the work that moves between calling attention to the violence of the original image and moving past it into a gesture of healing and redemption. Photographic reproductions found in the German anthropology book Die Völker der Erde, are enlarged in new reproductions which I then paint over. In part I am retracing the steps of 19th Century photographers who hand-colored their photographs. But where the goal for them was a heightened fidelity to the photograph, mine is to radically alter it. I am attempting a rehabilitation of the humanity, individuality and beauty of the women originally depicted. Transformed with contemporary clothing, fashionable hairstyles and makeup, the women make a shift from anonymous anthropological subject into a modern individual that commands the viewer’s attention. 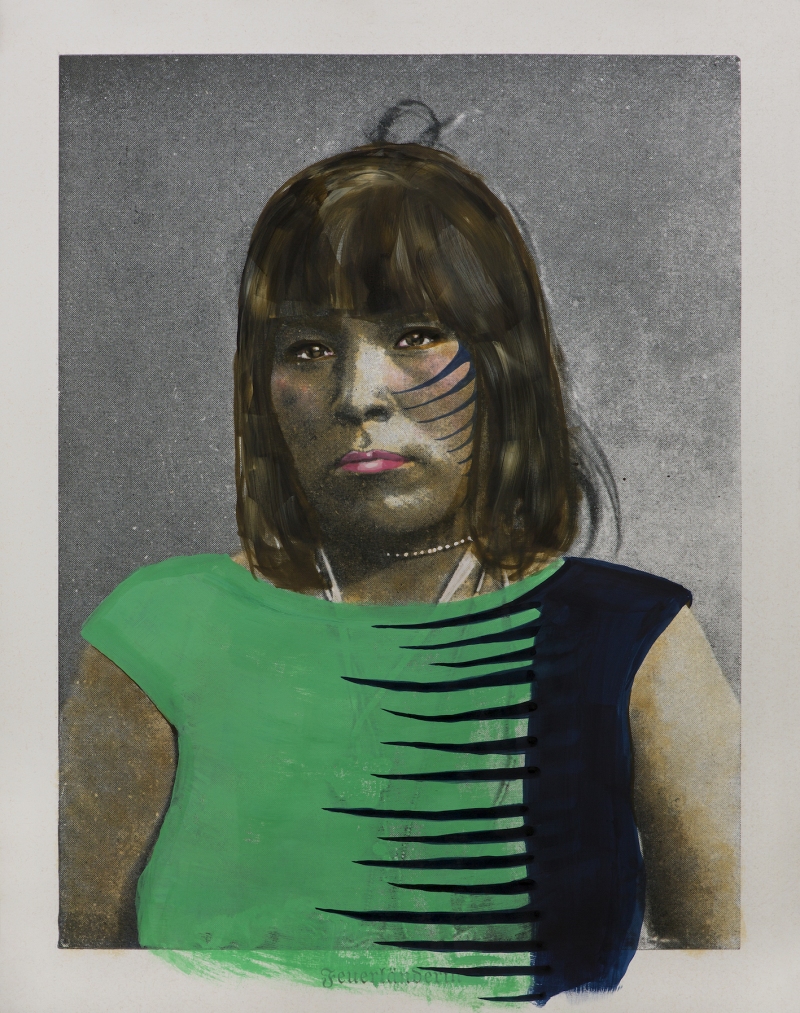 As an artist I have found, after many years of trial and error, a way of entering into empathic relationships with traumatic histories and create, at least for myself, new possibilities of healing. Perhaps Octavia Butler’s heroine, afflicted with Hyper Empathy Syndrome, can also become a possible model for transforming traumatic experience into positive structural change in place of the seemingly endless replications of violence we now live with.

Rajkamal Kahlon is an American artist based in Berlin. Kahlon’s interdisciplinary artistic practice questions the formal and conceptual limits of painting, photography and sculpture. Drawing on history, archives and literature, her research undergoes a process of creative transformation resulting in sensual, formally rigorous work that is about reclamation and the transcendence of history. By using her own hand in redrawing and repainting the bodies of photographed native subjects, Kahlon allows for the rehabilitation of those bodies, histories and cultures that have been erased, distorted and maligned. Kahlon’s diverse sources include classical western painting, 19th C Illustrated newspapers and history books, contemporary U.S. military autopsy reports, the history of science and medicine, colonial era photography, anthropological portraiture and pop culture. 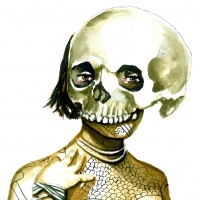 More on this topic