In this masterclass we engage with Professor Tina Campt’s work, by exploring critical race and feminist methods of thinking photography otherwise.

In her 2012 publication Image Matters: Archive, Photography and the African Diaspora in Europe, Tina Campt traced the emergence of a black European subject by examining how communities used family photography to create forms of identification and community. She analysed the relationship between affect and photography, by engaging with the tactile and sonic registers of family photographs in particular. In her recent publication Listening to Images (2017), Tina pushes the bar further by taking the perception of sound in photographs as her main focus. In doing so, she analyses the quiet intensity and quotidian practices of refusal of people of the African diaspora, thus uncovering voices in the softly buzzing tension of colonialism, that are so often left unheard.

This masterclass will give participants the opportunity to discuss their own research in relation to Tina’s work, and to Listening to Images in particular. Attendees will be expected to read Tina’s new book and will be asked to submit a short abstract (max 1 a4) describing their own research interests, experiences or projects using visual methods, objects or archives. We will use these to make connections between the work of participants and to shape the content of the seminar.

The Thinking Photography Lab (TPL) seeks to bring scholars, curators, makers/practitioners and students together on a regular basis (ideally multiple times per year) in a semi-formal setting, TPL is intended as a network space for those interested to think openly and critically about (ethnographic/colonial) photography, their histories, materialities, theories and their roles in the present.

Tina Campt is Claire Tow and Ann Whitney Olin Professor of Africana and Women’s, Gender and Sexuality Studies at Barnard College-Columbia University. Campt is a black feminist theorist whose work explores gendered, racial and diasporic formation in black communities in Europe, the US, and Southern Africa through the oral, sonic and visual texts produced by these communities. She is the author of three books: Other Germans: Black Germans and the Politics of Race, Gender and Memory in the Third Reich (2004), Image Matters: Archive, Photography and the African Diaspora in Europe(2012), and Listening to Images (2017). She is currently in residence as the 2018 Abigail R. Cohen Fellow at the Columbia Institute for Ideas and Imagination in Paris. 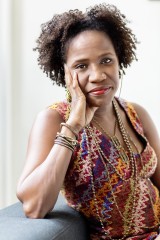 This event is sold out.

For any questions regarding the masterclass, please contact juliette.huijgen@wereldculturen.nl