This blog is an outcome of the Tholenaar van Raalte Fellowship in Photography that Susie held at the RCMC in 2018, and of an Australian Research Council Discovery Project (DP170100948).

The Tropenmuseum in Amsterdam has for many years had a permanent exhibition on colonial Indonesia. Recently, the museum undertook a consultation process to decolonise its exhibitions, which involved curators working with specialist advisors to reflect critically on how the museum had acquired its collections, and the contested histories that might be more carefully narrated with them. While the objects on display were not to be changed, walls and plaques were redesigned by, for example, introducing updated explanatory texts and photographic prints based on the museum’s extensive collections. 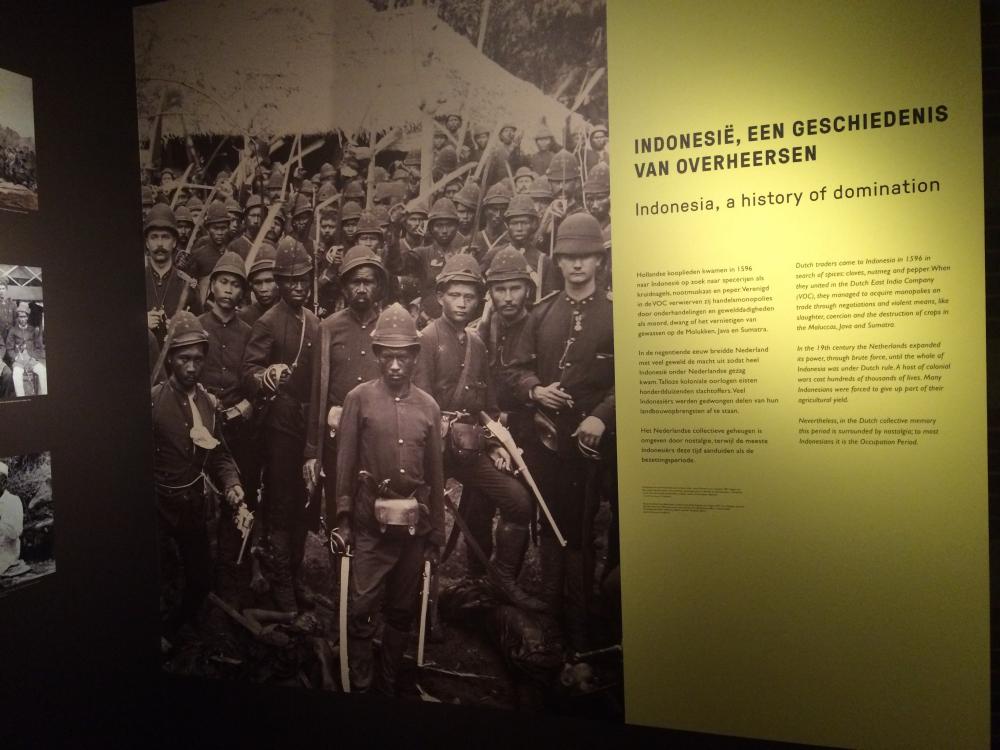 The alcove display, ‘Indonesia, a history of domination’ (pictured above), is one example of that intervention. It discusses the theme of colonial violence, illustrated by a photograph taken during the Dutch conquest of Aceh in the late nineteenth century. The armed soldiers of the KNIL (Koninklijk Nederlandsch-Indisch Leger, colonial army) take up most of the space in this image. On the ground at their feet, one can just make out the bodies of their victims.

The wall-print is actually a cropped version of the original photograph held in the Tropenmuseum archives. The original gives almost equal space to the dead on the ground. Why has the museum edited the photograph this way for display, to ostensibly focus on the perpetrators of violence and minimize the Acehnese who died at the ends of bayonets? Is this an instance of sensitivity, or censorship?

Late last year, I talked to Pim Westerkamp, the NMVW’s Curator for Southeast Asia, about this new display. Pim said that it was his decision to introduce the photograph to the exhibition, with the aim of addressing the complex topic of colonial violence and Indonesian resistance. The exhibition-makers––who comprise a specialist department responsible for the staging of exhibitions, and who work in consultation with but by no means at the direction of curators––disagreed with the choice. They argued that the representation of slaughtered Acehnese was too explicit for such an exhibition space (which is frequently visited by children and school groups). The compromise was to crop the photograph and omit the faces of the dead.

I am still thinking about this image, the processes that have shaped its ‘social life’ (following Kopytoff and Appadurai) in the museum, and the question of sensitivities to and censorship of colonial violence.

In my own research on natural disasters, war and conflict in colonial Indonesia, from the invention of photography to decolonization (c. 1839–1950), I used the NMVW’s database (the ‘TMS’) to compile a dataset, or working archive, of hundreds of photographs showing Indonesians at the centre of both kinds of disaster. In the TMS I sometimes encountered the following annotation, left by a registrar or curator or some other museum employee who worked on the database: ‘not for the public – human remains’. Indeed, many of these photographs catalogued in the TMS have not had an audience for a long time: the NMVW’s public, searchable database of objects shows only a portion of what is listed on the TMS, and the museums’ exhibitions necessarily make very limited use of the tens of thousands of photographs in the collections.

The note, ‘not for the public – human remains’, strikes me as the first link in a long chain of acts by museum workers, beginning with data-entry and ending in decisions about display, that inform the complex issue of what the public knows about histories of colonial disaster, whose perspectives those histories are narrated from, and the ethics of spectatorship.

These are high-stakes issues in media coverage of contemporary disasters, as well as in public discussions about the vivid legacies of colonialism in contemporary life in the Netherlands, Indonesia and, indeed, wherever empire is ongoing or a recent memory. Every scholar working on colonialism and photography has to work through the ethics of this context when deciding how to analyse and reproduce images in their research. I’ve had to engage directly with this problematic in my own recent work on Dutch soldiers’ amateur photographs taken during the military operations launched by the Netherlands in response to the Indonesian declaration of independence (see a clip of one of the talks I have given on this topic here).1

Photographs of atrocities committed during colonial wars can serve as evidence of disputed incidents, in cases working towards truth, justice and reconciliation, as well as for compensation and restitution. Significantly, however, arguments about ‘evidence’ are often more important for convincing the community from which the perpetrators of violence came. Victims and survivors already know what happened, and for them, equally important is the question of how to represent images of suffering in their community in ways that balance truth and testimony, on the one hand, with dignity, care and agency on the other.

These are considerations that are increasingly given to photographs of suffering people under armed occupation, colonialism, and slavery, and which might perhaps be extended to images of suffering in natural disaster, certainly where the visual economy in which they first circulated was a colonial one. Or so I’ve been thinking, as I research disaster in Indonesia over the first century of photography. 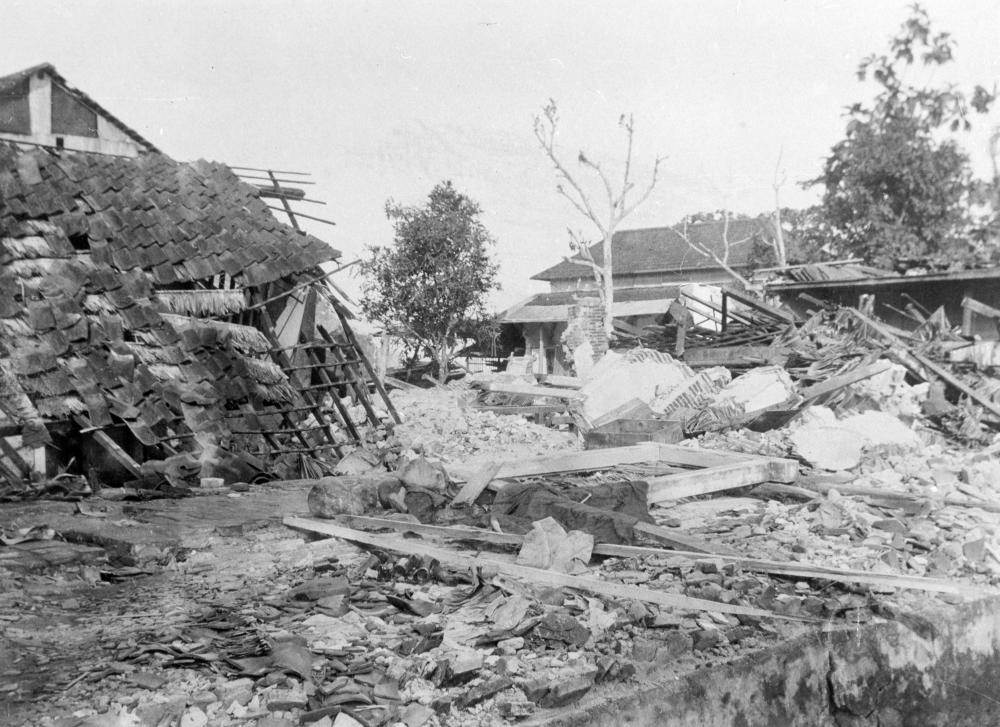 The advent of amateur photography in early twentieth-century Indonesia shows us a phenomenon that we are now all too familiar with from recent global disasters such as the 2004 Indian Ocean Tsunami: that those who make mobile witnesses to spectacular disasters are not invested in the aftermath in the same way as those who cannot flee them. One of the personal albums in the Tropenmuseum collections shows how European photographers captured the aftermath of the 1919 Kelud eruption on Java, and a 1924 earthquake in Wonosobo. In 1925, a Dutch decided they had had enough disasters in Java, and took an extended boat cruise to Europe. It is this view, of the boat leaving, that ends their narrative. 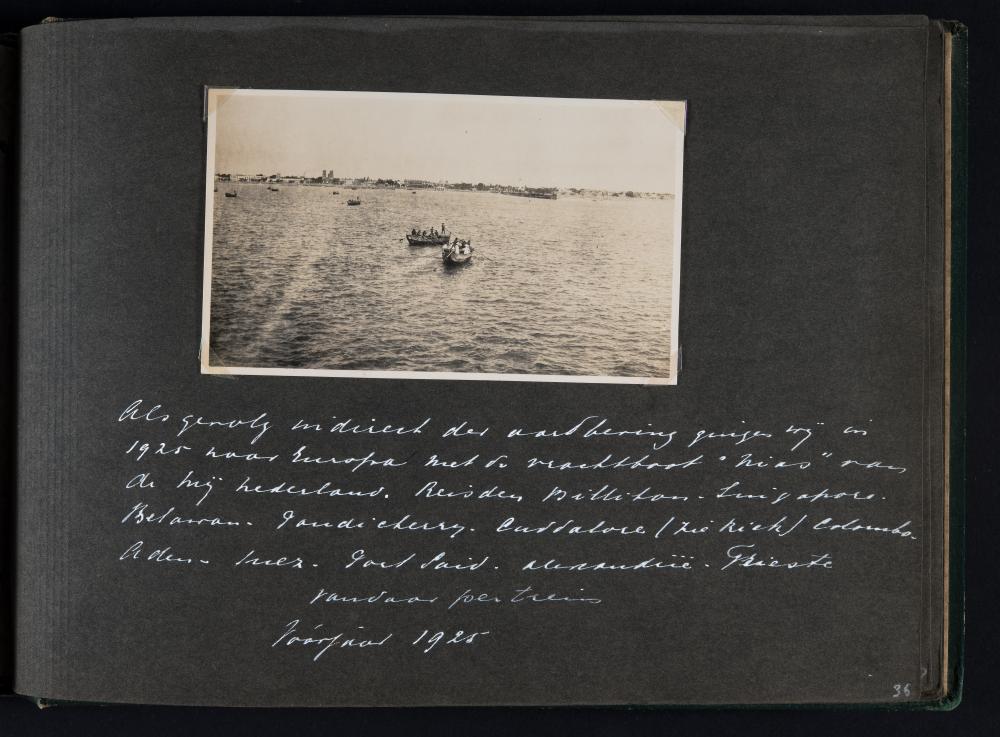 Figure 4: Goodbye to disasters. Page from a personal album belonging to a European couple who witnessed the aftermath of the Kelud eruption (1919) and the Wonosobo earthquake (1924) on Java. Collection Stichting NMVW. Collection no. TM-ALB-2121.

Barbie Zelizer wrote about the global media representation of the 2004 Indian Ocean earthquake and tsunami (among other major catastrophes),3 focusing on how foreign journalists represented the acute phase of a disaster that affected hundreds of thousands of people in 14 countries around the Indian Ocean rim. Western journalists often ‘entered’ the disaster through the lens of suffering western tourists caught in the tragedy. Meanwhile, the dignity of local victims was not equally maintained when it came to decisions around the depiction of the dead and respect for grieving communities. In the short term, journalists’ photographs evinced an unprecedented outpouring of international aid (private donations and government funding) to assist the victims of disaster. But the other outcome was an image in the western media of the worst affected countries––Indonesia, Thailand, Sri Lanka––as backward, abject sites of disaster where local people were not seen to recover with dignity and agency. Foreign journalists ‘left’ the disaster carelessly.

The suffering of people ‘close’ to us is frequently photographed differently from that of people further away, spatially, temporally, culturally and emotionally. In the latter case, we often see their suffering functionally, and stop thinking about how they are going to resume living once we look away. Images of suffering are therefore never self-explanatory, and indeed, often contested. To take care in making the terms of that contest explicit –– the stakeholders in disaster stories, and the different versions of the narrative they support –– is a difficult task for historians working with primary sources, and for museums exhibiting colonial collections. I have not resolved my own doubts about what to ‘do with’ photographs of suffering in disaster. ‘How to do’, perhaps, is the more pertinent beginning to thinking about the problem.

This blog is an outcome of the Tholenaar van Raalte Fellowship in Photography that I held at the RCMC in 2018, and of an Australian Research Council Discovery Project (DP170100948).

To cite from this blog, please use the following format: Susie Protschky, ‘”Not for the public – human remains”: Decolonising disaster in the museum’, https://www.materialculture.nl/en/not-public-human-remains-decolonising-disaster-museum.

Part One | Searching for Indonesian Histories of Disaster in Photography

Part Two | ‘Not for the public – human remains’: Decolonising disaster in the museum.

Part Three | Who is the intrepid explorer here? Indonesians living with disaster.

This blog is an outcome of the Tholenaar va

In this object analysis Niall Martin describes a Quechan pottery canteen and considers how the pot might act as an invitation, or a provocation, to think more generally about the stories that can be told about practices of care both within and beyond the institution of the ethnographic museum.
Link
Pitt Rivers Museum Item 1951.10.61 and Hawaiian o’o, mamo and ‘l’wi

In this object analysis Dr. Ashley Coutu, describes a Polynesian cloak of Feathers and its relation to endangerment, and ecological and gendered knowledge.
Link
Illustrations to Shahnama manuscripts in the National Museum of World Cultures, Netherlands