This blog is an outcome of the Tholenaar van Raalte Fellowship in Photography that Susie held at the RCMC in 2018, and of an Australian Research Council Discovery Project (DP170100948).

Volcanoes have long captured the imagination of artists in Indonesia, such as the nineteenth-century painter, Raden Saleh (1811–80), whose paintings of Gunung Merapi erupting by day and by night in 1865 now hang in the National Gallery of Singapore. The earliest disaster photographers in Indonesia were arguably commercial operators––like Onnes Kurkdjian (1851–1903), CB Nieuwenhuys (1863–1922) and Thilly Weissenborn (1883–1964), among others––who captured some of the most famous and enduring images of landslides and erupting volcanoes from the era of black-and-white photography. 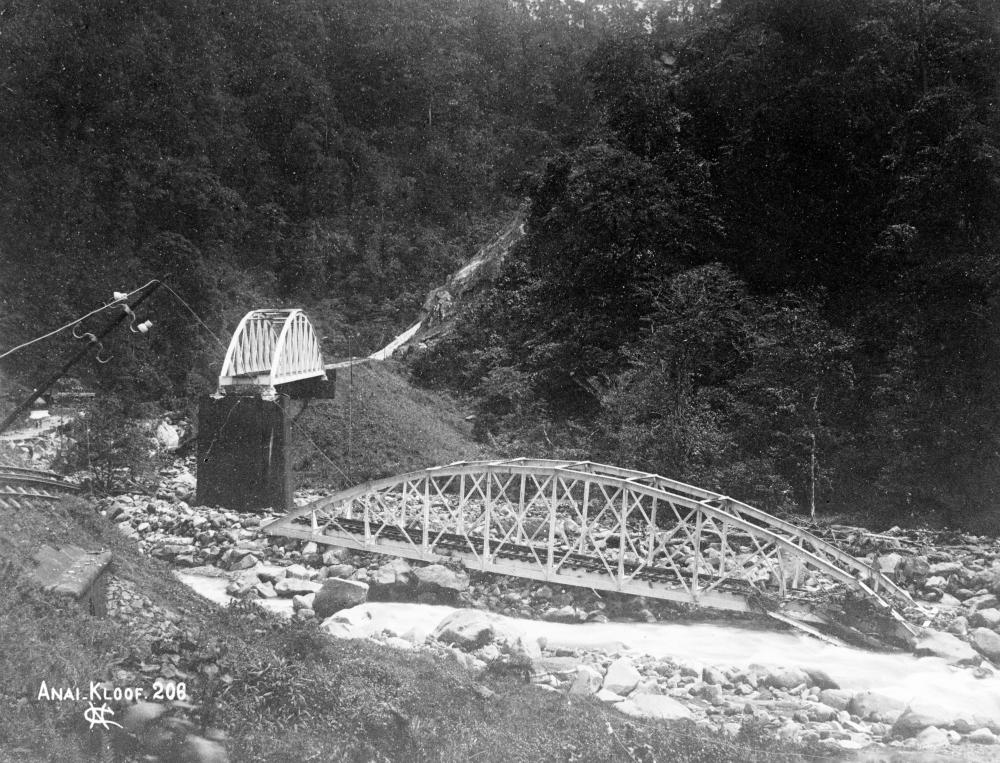 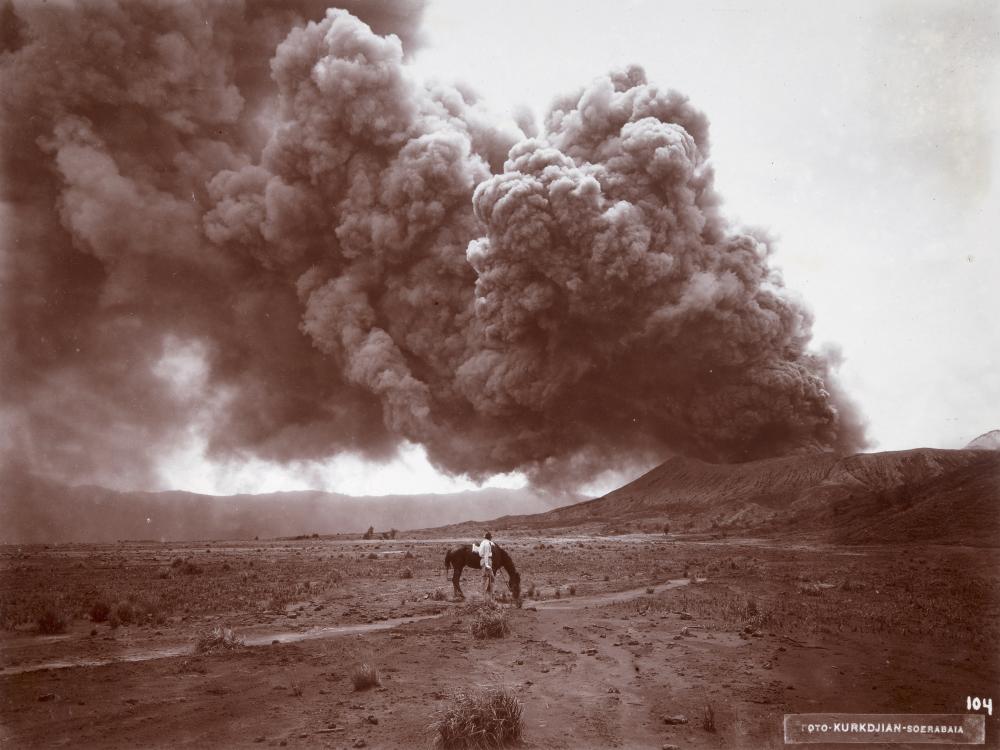 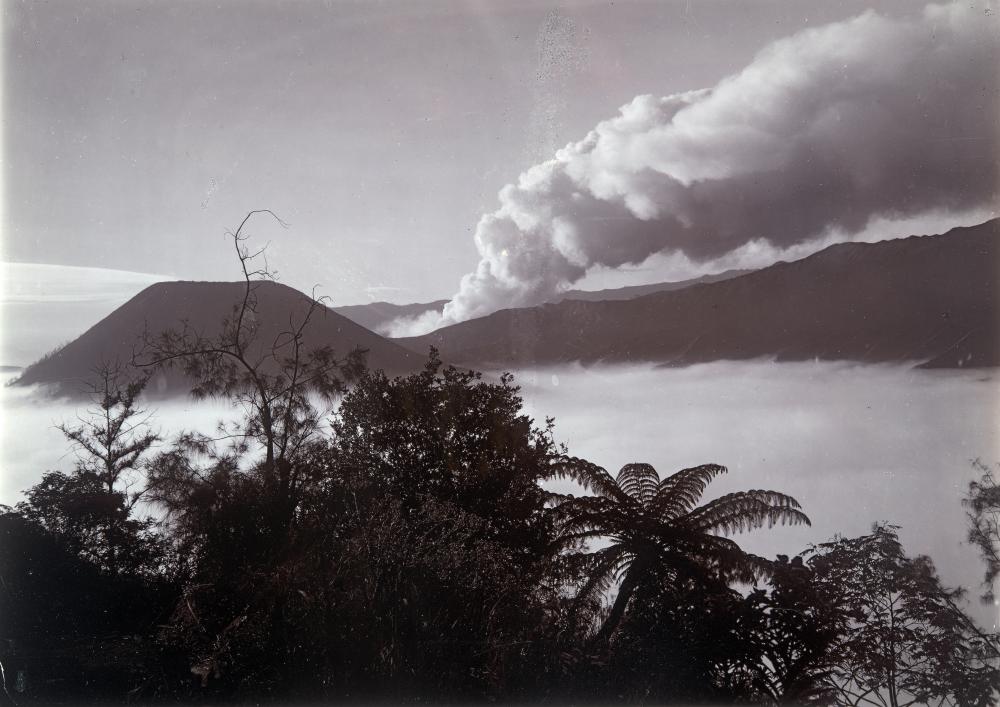 These were photographs that emphasised the spectacularity of volcanic eruptions. Where the images were of more ‘placidly’ active volcanoes––the picturesque smoking crater––they emphasised colonial notions of tropicality. From the late nineteenth century onwards, a grislier genre of photography emerged, documenting the human toll of disasters, including razed villages, the dead and wounded, and refugees. These were the photographs I had in mind for examining when I began my project on ‘Disaster, human suffering and colonial photography’; and indeed, they will have an important place in my research. But as I began working through the archives, I had to acknowledge how frequently European photographers were drawn to volatile tropical landscapes, such as volcano sites, which only sometimes turned disastrous. It made me think about how nineteenth and twentieth-century Indonesians were living with disaster as a constant possibility, but one integrated into the everyday in ways that warranted closer inspection.

As Liesbeth Ouwehand has suggested1, commercial photographers stimulated European tourism to volcano sites in colonial Indonesia. In my research I have discovered just how important photography was for volcano enthusiasts, who often combined a hobby interest in the emerging science of geology and volcanology with motor tours of Java to ‘hill stations’ in volcanic mountain ranges. Such tours typically involved with nice hotels, guided tours and hiking parties. Indeed, the most popular and frequently photographed destinations on Java were Gunung Papandayan, accessible from the resort town of Garut, and Bromo, Smeru and Batok in the Tengger Ranges.

Commercial photographs from the 1890s and 1900s had an important afterlife for decades after their making, well into the era of amateur photography, which seriously took off in the 1920s. In many albums that I looked at, volcano enthusiasts collected ‘old’ commercial photographs and mingled them together with their own, self-made snapshots of the same locations. Sometimes the two kinds of photographs were even laid side by side, as though the album-maker was recording a goal achieved: with the (commercial) photograph that inspired her to seek out the volcano in the first place next to the snapshot of the summit (or the crater) taken by her own hand beside it. These practices show that commercial photographs made in the age of tripods and brittle plates were placed in interaction with those of amateurs using hand-held cameras and roll films. Changes in technology did not therefore displace the circulation of older images. On the contrary, earlier commercial photographs became iconic as references for amateur photographers.

The social function of volcano photographs, old and new, was thus to inspire but also document journeys that European travellers were making through colonial Indonesia’s picturesque, spectacular and volatile landscapes. The modes in which Europeans interacted with Indonesia’s environment, as tourists and adventurers, was shaped by photography.

Two of the endlessly repeated themes in the volcano photographs I examined in my research were, first, the close-up of the smoking crater and second, the panoramic view of taken from the peak of another mountain. 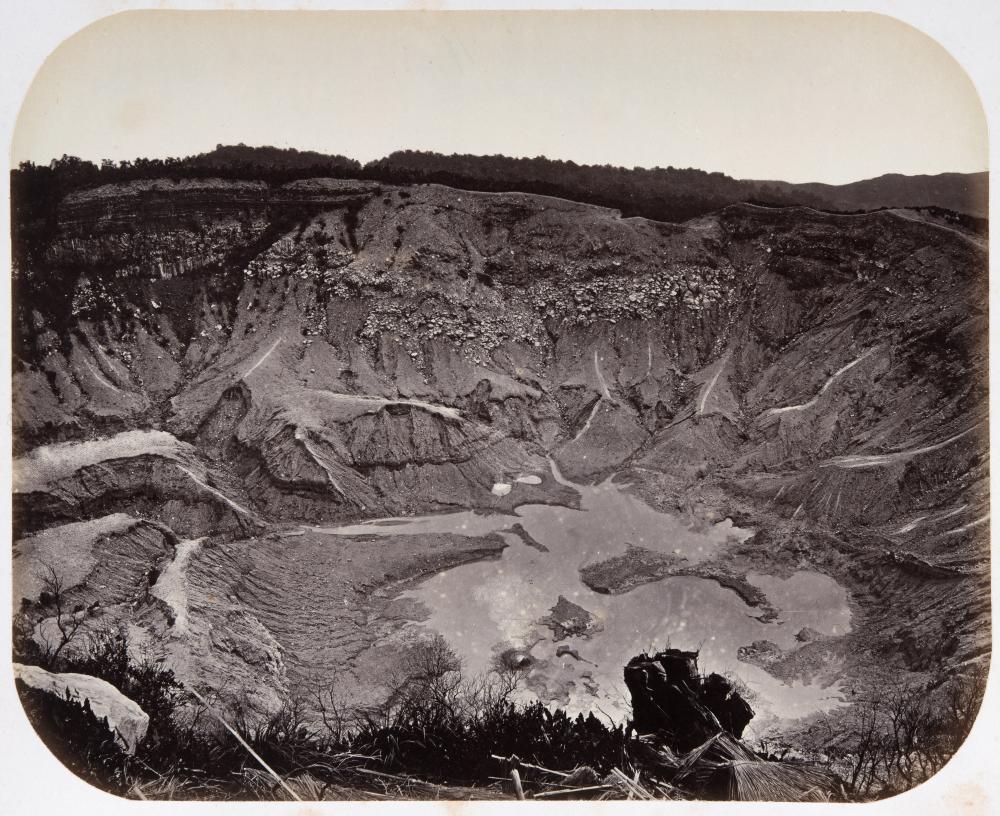 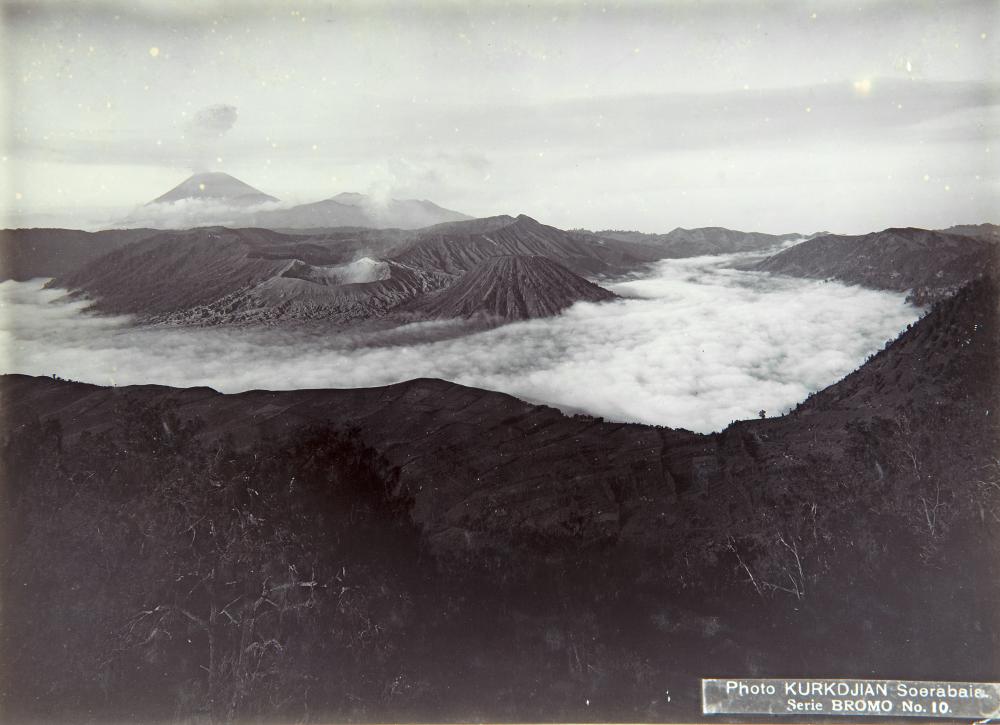 This is true for amateur as well as commercial photography across the first half of the twentieth century. What such photographs do is to signal the intrepid achievements of the photographer, willing to brave a volatile tropics in pursuit of an impressive view and a rare experience.

As histories of European science and archaeology have repeatedly shown, colonial records often encourage us to focus on the exploits of the person who does the recording. What dawned on me as I looked more carefully at photographs in the archives was the presence of Indonesians as porters and guides to European volcano enthusiasts. It was Indonesian expertise and hard graft that enabled the exploring of European scientists, adventurers and amateur climbers. Indonesians were there right from the beginning, in the work of commercial photographers, and their presence only became stronger as amateur photographers took their cameras with them. 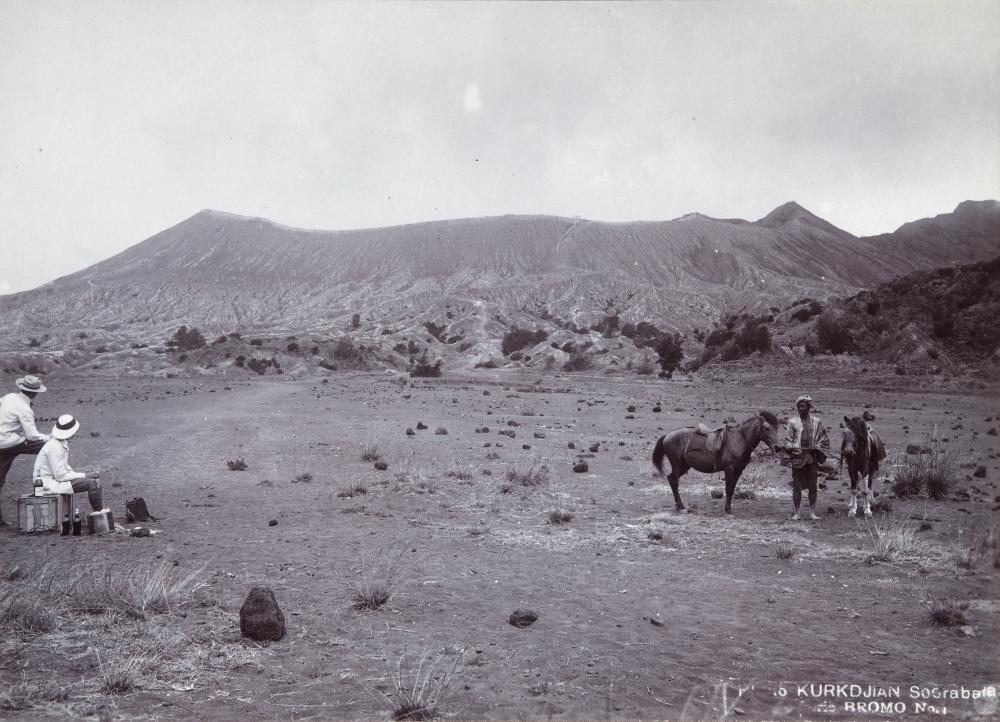 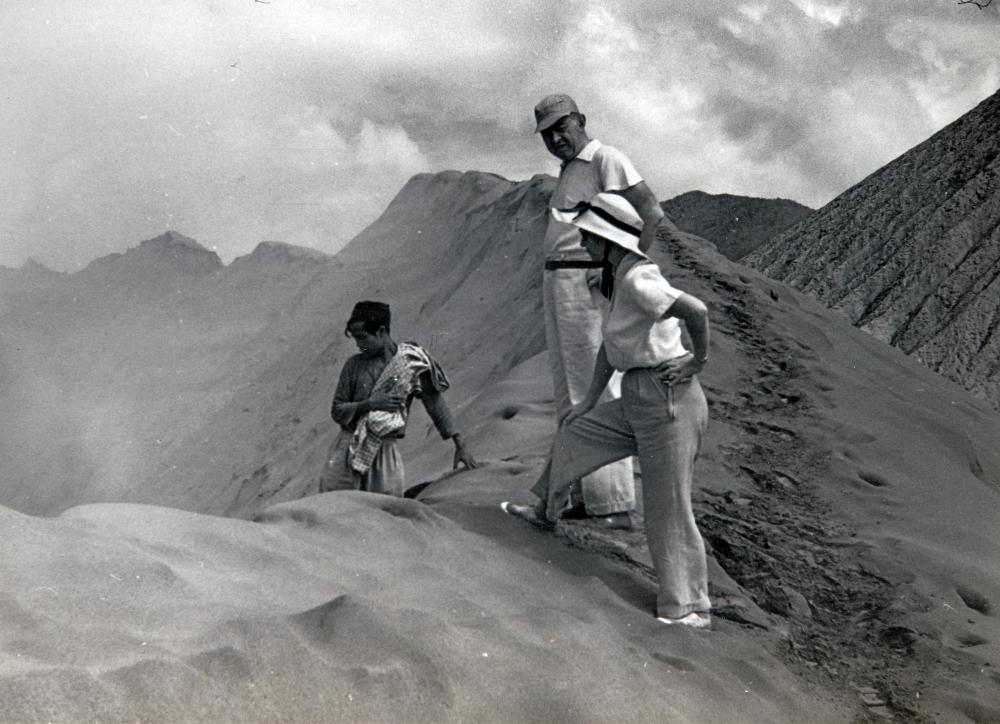 Intrepid European photographer-adventurers were reliant on the Indonesians who worked among the volcanoes, guiding unfamiliar Europeans through the terrain, and carrying their luggage, often on the backs of ponies.

Significantly, the consumers of volcano tourism frequently included images of the Indonesian porters and guides in their photographs in ways that tourism operators did not. My preliminary survey of colonial tourist brochures shows that local porters and guides were alluded to as one of the item costs involved in visiting a volcano, but in very vague terms that barely acknowledged the significant, living and breathing, human and animal labour that would be involved. Yet without the knowledge, experience and labour of Indonesians and their pack animals, few of the photographs that now exist in colonial archives would exist to attest to late nineteenth and early twentieth-century volcano exploration. Indonesian guides are occasionally named in captions, but this is rare. More usually, they are present but tangential to the story of the (European) tour. They are visible in some photographs as picturesque ‘staffage’, to enliven a landscape that would otherwise be empty of people. In other photographs, they are present because they were clearly an integral component of the tour.

These images lead us to the question, who is really the intrepid explorer in colonial era photographs of volcano tourism? And what does living with disaster entail? Indonesians have long lived and prospered by volcanoes, which foster the fertile soils and intensive modes of agriculture upon which great kingdoms thrive and empires rise (and fall). Photographs of volcano tourism from the colonial era suggest that Indonesians working on volcanoes, in a colonial tourist industry, are important components in histories of disaster that demand more attention.

Photographs of the porters and guides who led European tours across volcano landscapes put Indonesians back into the story of how museums obtained their colonial collections – not just the photographs of adventurers in ethnographic and colonial museums, but also mineral and rock samples collected by explorers and scientists in natural history museums. These photographs provide a link to the present, showing the long history of tourism work that Indonesians have been carrying out in dangerous environments that make the news when disaster hits, but are forgotten when normality resumes. These workers have been there for a long time – more than a century, if the photographic record is anything to go by. Yet they have not been visible, because looking at the volcano (the spectacle), or at the Europeans looking at the volcano (the collectors), is the dominant narrative of the museums where such photographs are typically held. It is, however, possible to look with more care, and to see colonial photographs in ways that restore the concerns of the living, then and now, to past and present disasters.

This blog is an outcome of the Tholenaar van Raalte Fellowship in Photography that I held at the RCMC in 2018, and of an Australian Research Council Discovery Project (DP170100948).

To cite from this blog, please use the following format: Susie Protschky, ‘Who is the intrepid explorer here? Indonesians living with disaster’, https://www.materialculture.nl/en/who-intrepid-explorer-here-indonesians-living-disaster.

Part One | Searching for Indonesian Histories of Disaster in Photography

Part Two | ‘Not for the public – human remains’: Decolonising disaster in the museum.

Part Three | Who is the intrepid explorer here? Indonesians living with disaster.

In this object analysis Niall Martin describes a Quechan pottery canteen and considers how the pot might act as an invitation, or a provocation, to think more generally about the stories that can be told about practices of care both within and beyond the institution of the ethnographic museum.
Link
Pitt Rivers Museum Item 1951.10.61 and Hawaiian o’o, mamo and ‘l’wi

In this object analysis Dr. Ashley Coutu, describes a Polynesian cloak of Feathers and its relation to endangerment, and ecological and gendered knowledge.
Link
Illustrations to Shahnama manuscripts in the National Museum of World Cultures, Netherlands